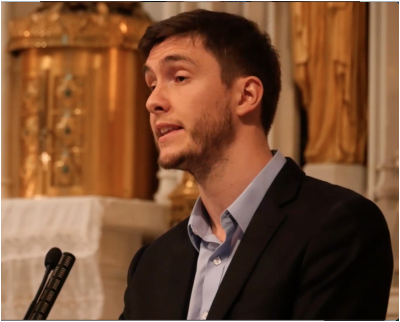 Willilam Chambers
Ed believed in straight talking, on the value of interaction with fellow humans. He placed little worth on the “non-doing talkers” or the “self aggrandizers”. Listening to today he probably would have said something like: “Well, what good is that going to do anyone. I won’t be there to enjoy it. Save your breath and go do something useful.”

Dad engaged with the public and private world as one man. He believed in leading a spiritual life and taking the time to reflect on that life, to reflect on what it means to be human: temporary, yet passionate and energized about adding something to the world. So with that in mind, perhaps this moment of reflection can prove useful and maybe then he wouldn’t object too much.

After all, reflecting is what you’re supposed to do after an Action, right? Reflect. Evaluate. Figure out what went right, what went wrong and learn something in the process? Well Ed’s life was one heck of an Action.

His rules were the same public or private. He was an agitator, a button pusher, a master troublemaker. His ability to wind up or infuriate you knew no bounds. Colleagues and those he mentored got a half dose. His children got the full course. When my sister Lily got her doctorate, she rang him up to tell him the news. Laughingly he replied, “What took you so long. I’ve already got two of those and I didn’t even have to go to school for them!”.

He was that sort of father. He would push us, challenge us, be our biggest advocate. He was protective, strong and kind.

All those organizing rules, somehow became common currency in our lives. For me they are not rules on how to work, but on how to live. With Ed in your life there is always a chance for a lesson.

“Never do for others what they can do for themselves.”

My sister Mae told me that when she was about 6 years old Dad took her to the beach. She was faced with joining her father out beyond the breaking waves which, while small for a 6’5 man, seemed huge to her. Half way out into the water she made the mistake of losing her nerve and turning back to shore. She was promptly steamrolled. Ed picked her out of the sand and surf and tears and set her on her feet. “Try again,” he said. “You’ve gotta just push through. Don't stop moving once you start.”

There was no carrying to safety by Dad. Instead he armed his children with something more useful: Self belief. Courage. Mae followed his advice, and sure enough she succeeded. What he has armed me with will far outlive his ability to communicate it. I think that is true not only for many people in this room, but for many across the world.

My privileged generation cannot image what it was like to be born in Iowa at the height of the Great Depression. To face two career choices: doctor or priest. To have everything you believe in and work towards yanked out from under you at a young age and still come out on top, achieve what you want to, and do some good in the process.

Ed had no small amount of personal courage. At the end of his rich life he confronted his greatest fear - the loss of a powerful mind to Alzheimer's. He faced this with humility and strength. As his huge brilliant mind was robbed from him, what were left were the attributes that were at his core, but not always on view in his public life: Gentleness, kindness, a dedication to family, a love of his grandchildren.

As we reflect, on the Action that was Ed’s life, my take away is that the world is an unfinished place; that Ed had so much left to do and so much hunger to do it with - enough for many lifetimes. Luckily he touched the lives of many. So now we get to keep on working on these things.

If here, he’d want to stir things up a bit. He’d prod us: What are you comfortable about that you shouldn’t be?  What have you turned a blind eye to, that you shouldn’t have. When’s the last time something made you angry but you didn’t do anything about it? When’s the last time you related to your loved one, your son or daughter, your colleague, your neighbour, your fellow man or woman in a deep and meaningful way?

If we were to evaluate the success of the Action that was Ed’s life on adulations received, wealth and fame accrued, or statues erected it would be an abject failure. Instead, his statues are a generation of community leaders across many countries. His wealth is in his children and grandchildren that he loved so fiercely. His adulations are any time his memory provokes a questioning mind or a challenging statement.

Those are the things that are useful in this world. That legacy that would please him most.

Ed Chambers was the best father and best mentor. He was the biggest man in my life and I am immensely proud of him. He would have loved to have seen you all here. Thank you all again.