By Bill Droel
When President John Kennedy was murdered in November 1963, I was a 16-year old high school student in Rochester. For the first time I felt that the world outside my otherwise seemingly perfect home, school and church setting contained forces I did not understand. Those feelings intensified a few months later when the riot occurred in Rochester. I wanted things to make sense—but now they didn’t.

Rochester’s reaction to the invitation extended to Saul Alinsky gradually imposed some meaning on my confusions. And believe me, the reaction to him in my city was constant and fiercely negative. In cavalier, sometimes crude style Alinsky went out of his way to fuel the reaction. That made me curious about him. So one Saturday I went to the downtown public library and got his Reveille for Radicals (Knopf, 1946).

During my freshman year at college (about one year after the initial FIGHT convention), a priest, Fr. Jack Skvorak, took me to a FIGHT meeting, held in a woman’s home. Listening there, I got the idea that ordinary Christians could respond to senselessness by banning together to humanize the world. Eventually, another Rochester priest, Fr. P. David Finks, who later was a founder of the Catholic Campaign for Human Development and author of The Radical Vision of Saul Alinsky (Paulist Press, 1984), got me involved with Friends of Fight and doing some canvassing for FIGHT itself.

I had a general call to do something for people since about age ten. But I lacked specifics and amplification of that call until FIGHT.  Through it and several other college-time experiences I developed the main theme of my vocation: Christians are obligated to change social policy and institutions and that with some patience and sophistication such change is possible and, in my experience, the endeavor is fun—though not without sacrifice.

Sometime in senior year of college I went again to the downtown library where old phonebooks were stored. (Those were days before computers.) I found Industrial Areas Foundation on South Michigan Ave. in a Chicago directory. I wrote Alinsky for an appointment. We met one afternoon that summer in his office. It was easy to get him going by mentioning the name of a prominent reporter from Rochester, his nemesis.

Alinsky told me to soon return to his training institute on North Michigan Ave. in Chicago. I then spent three months there; Arnie Graf was in my group. Then for about eight years I assisted IAF groups in Chicago, St. Paul and Buffalo; staying in touch with IAF thereafter. 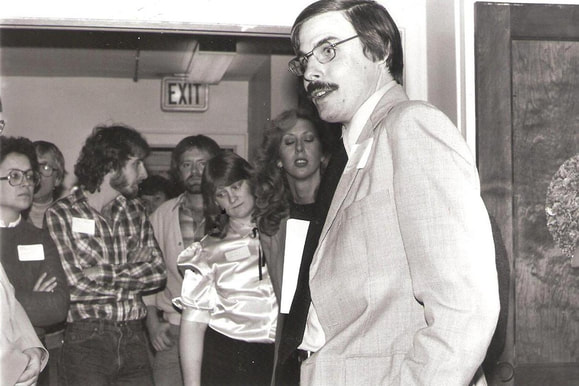